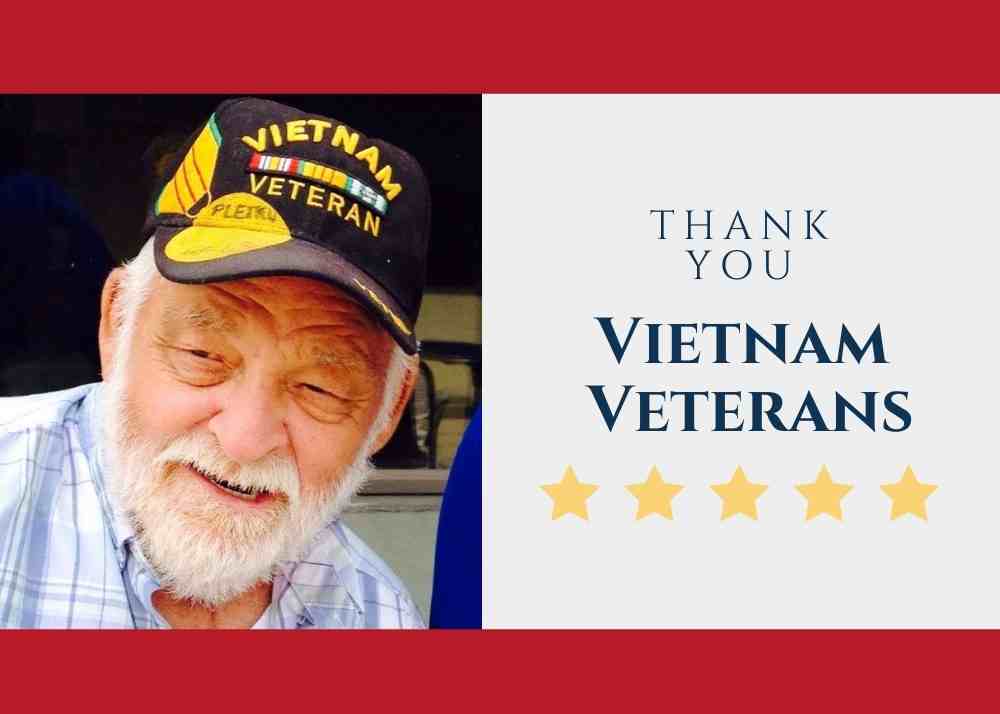 My father, LaVerne Payne, was drafted and served in Vietnam as a truck driver for the 1st Field Forces and later he was transferred to the 4th Infantry Division in 1967. He is pictured above.

Dad drove the 5 ton military truck in all types of weather conditions in a very treacherous, mountainous part of Vietnam, the Central Highlands. The road could be nothing but dry dust or it could be impossibly wet, muddy, and almost like grease in the rainy season. This truck could handle any weather or terrain—if the driver could handle it. Dad could. Many times trucks were “sitting ducks” as they waited in long lines first thing in the morning, loaded with ammunition, while the roads were being mine swept. Maintaining your own truck, changing tires, and knowing how to keep it running were all valuable skills that he was lucky to have from his farming background. The goal was not to stop–as that could mean death.

Dad, age 24, was in truck convoys primarily around Pleiku. For the 1st Field Forces, he and his co-driver and machine gunner, John Black, were hauling M-110 8-inch howitzer rounds (weighed 204 pounds each) and 175 mm M113 rounds (weighed 150 pounds each). It's my understanding that they were supporting the artillery’s long-range attacks on the Viet Cong that would hopefully save lives for troops on the ground. Upon reaching their destination, Dad and John had to hand unload these rounds; on return to base, they loaded their truck for the next day's mission (an 18-hour day typically).

The ammunition (ammo) had to get where it was going. Dad's buddy, John, age 18, manned the machine gun while dad drove; my father never fired his weapon but preferred to drive. John said that Dad really knew how to drive; it was not easy to keep driving toward the battle when there was shelling overhead.

In late 1967, as part of the 4th Infantry Division, he drove ammo into what was later called the Battle of Dak To and described spending many frightening and uncomfortable hours in a crowded bunker (their tents were shot full of holes when they emerged). They were lucky to make it back out of there alive with their truck convoy when it was not safe, but still they had to go.

My father never forgot the Montagnard “highlander” people of the Central Highlands (indigenous people of Vietnam). He and other soldiers were ordered to help load up their homes onto trucks for a move to supposedly safer locations. I think he found this very hard, and he remembered it, because he had a very big heart. He was sad for the soldiers on the ground and he was sad for the Vietnamese people, especially the children who were hungry, and the animals too (he loved all animals--including Projo the camp dog). War is hell.

In the years I was growing up, my father worked hard for the U.S. Postal Service, on the family farm, for the school district, AND he did odd jobs in his “free time.” He was always moving! Full of energy and life. He could build things and fix things. He and my mom put all their kids through college or advanced training, and he was proud of that. As his life progressed (and starting even in his early 50s), he was hit hard with medical conditions that he tried to fight and overcome, but one thing led to another. He had first developed Type II diabetes, sores that wouldn’t heal, a broken leg that healed badly, and later amputations, heart trouble, and dialysis. The Veterans Administration Hospital did all they could to help him through these conditions and provided equipment and therapy, and the Winter Park Memorial Hospital in Florida provided great care when amputation was needed. A man who could once walk 10 miles a day delivering mail, was now doing his best to live a good life using his motorized scooter to get around (and he still had a smile on his face as much as was possible). Helping him navigate all the medical care, was my incredible mother, Linda, who did all she could to help and to keep him going! Because he didn’t want to slow down or lose the ability to do the things he loved (old cars, antiques, farming, and grandchildren–10 of them!). He couldn’t explain the rashes on his arms; he wondered what was causing the muscle loss in his hands. “I’m getting worse,” he would say. I believe that many of his physical ailments were made worse or were the result of exposure to Agent Orange, a herbicide utilized by the U.S. in the war to eliminate foliage cover and crops in the mountains where dad served.

As he got older, he was able to speak about Vietnam more and more. The Army was a part of our lives as kids because we would shine his boots before he went to Army Reserves twice a month in Erie, Pennsylvania, for 18 years after his two years of active duty, and we went to summer camp too at Watertown, New York once (which was really fun for a kid).* He rode in parades proudly with the Army Reserves and we waved and yelled. I think it helped him to share more after I recorded him speaking about Vietnam. It was still very, very hard to share for him. He witnessed the horror of running over a landmine and other life-threatening events (he learned to pack sandbags under his legs in the truck after another soldier lost his legs from a landmine). It was a mix of terror and incredible friendships over there. His friendship with John was rekindled years later when John called him up one day; these were buddies for life and they enjoyed visits in their 60s. After my father died, I visited the Bob Hope monument in San Diego, and I had a good cry there. I knew from his recorded story that one of the best times in Vietnam for him was watching Bob Hope and other entertainers perform on a crowded hillside. It moved me that this was actually one very happy moment for him and other soldiers in a country that was so full of death and despair on all sides.

I am so very proud of my dad, a Vietnam veteran. My dad was drafted by his country and he went. He wore his Vietnam hat proudly in the last few years of his life. He laughed as he told stories about basic training, and he shared some of the toughest, scariest times with others he met while wearing his hat.

For my father and for all the men and women who served in Vietnam, I see your Vietnam hats as a badge of loyalty, honor, and bravery. That hat is an opportunity for me and others to learn something if we take the time to listen. We want to know where you served and when you served specifically (if you are willing to share). It’s also time to think deeply about the impact of war. Those who can’t learn from history are doomed to repeat it. Teenagers and 20-somethings did not want to be in Vietnam. It was a war that was ugly from all angles and all sides and it still hurts today.

Vietnam and every war have so many victims. Some died, some hurt from their wounds even today, some are loved ones of the fallen, some are physically okay but mentally still struggle with PTSD or other conditions. Some were yelled at and spit upon in the airport when they finally were able to come home (just heard two veterans describe this in the last year—so heartbreaking).

Some are feeling the devastating impact of Agent Orange on their bodies. My dad, LaVerne Payne, died too young on January 20, 2017, at the age of 73. I believe that Agent Orange shortened his beautiful and remarkable life. He was still doing all he could to LIVE until the end of his last day.

Let’s not forget that today is March 29, 2022 and it is National Vietnam War Veterans Day. I want to take this chance to say welcome home to all the Vietnam Veterans in our lives. Let’s take the time to listen to their incredible stories and learn. We are so glad you came home. We also want to honor your friends and fellow soldiers who lost their lives. It is a loss then and it is still a loss today. Thank you for your service and for all that I have learned about strength and courage from your example. When I see you wearing that Vietnam hat, don’t be surprised if I think of my dad, and I think of you in Vietnam, and I have a tear in my eye. I want to hear your story.

Beth Sanders, the proud daughter of LaVerne Payne (the oldest of his five children)

* LaVerne was married in June 1966 and he started basic training at Fort Benning, Georgia, on September 9, 1966. From there he went to Fort Sill, Oklahoma for AIT training in November 1966. He was home briefly at Christmas 1966. By January 10, 1967, he had to report to Fort Dix, in New Jersey, and he flew right to Vietnam. He was in Vietnam from January through December 1967 – arriving home before Christmas 1967. His brother, Lynn, was also in Vietnam in the Air Force around the same time. He spent the last eight months of active duty at Fort Campbell, Kentucky, and got out the Army on August 9, 1968. He was in Army Reserve for 18 years; he had 20 years of total service.

From John Black, April 2022:
"I first met your father when I was 18 and LaVerne was 24. I admit I wasn't impressed with LaVerne. I thought he was somehow too old to fight in this war. His first assignment was 1st Field Forces; it was later in his tour when he was transferred to 4th infantry.  For reasons I didn't understand, I decided I would team up with him. He was going to be a 5 ton truck driver; I decided to be his co-driver or machine gunner. We hauled 8" and 175 rounds weighing 204 and 150 pounds respectively. At our destination, we hand unloaded these rounds and on return we loaded rounds for the next day's mission. The work hours were normally 18 hours (if not more) and your dad was amazing. I soon took back my first impression and found that your father was far superior than the rest of us. He could drive without fear. The drives were over rough terrain and many a time we lost a truck to a landmine. In fact, your father and I hit a landmine and the explosion was earth shattering. It was the dry season and the explosion lifted up a ton of dust; we couldn't see for some minutes. We both were unharmed and later we laughed it off. I admired LaVerne more and more every day. One thing is that it is important to keep your truck in good order. After our truck received that explosion, it needed to be repaired. Repair and keeping the truck maintained well mattered. Let's just say that no one could care for any 5-ton truck better than LaVerne. I remember how dark a day it was when your dad was transferred to the 4th Infantry Division. I cannot say anything except according to your analogy, it sounds just like him. I miss your dad; he was like a brother to me."