My Most "Memorable" Teacher! 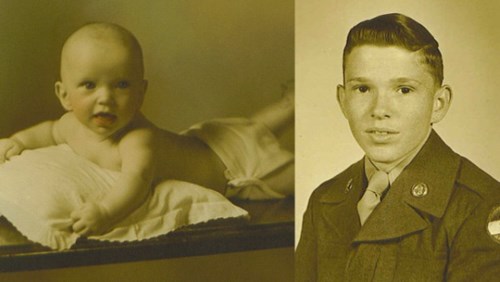 "My brother, Roland, was always my 'other dad' since he was 8 years older than me. He taught me how to ride a bicycle; catch a baseball; and later when I was driving, he helped me get a car unstuck and also helped with cleaning the spark-plugs."

"My brother, Roland, was always my 'other dad' since he was 8 years older than me. He taught me how to ride a bicycle; catch a baseball; and later when I was driving, he helped me get a car unstuck and also helped with cleaning the spark-plugs.

We got along pretty well for two brothers. There were times we did not get along, but I was most likely the cause. After we were grown we made several trips together, once to New York City and to Florida several times. I usually cooked and he picked the things to do. He was a good and positive mentor to grow up with.

When I was in the sixth grade, my English teacher was a lady by the name of Miss Bostick. We had to write our spelling and themes with an ink pen, and our desk had an ink well. She also wanted us to learn a particular writing style called the Palmer method. This was very hard for me for several reasons:  my motor skills were not good; I was not creative with my writing; and my dyslexia did not go well with the Palmer method. To top things off, during your writings she would walk up and down the aisle and stamp a star or a pigpen on your paper. Well, I always got the pigpen!

Each night at the dinner table I complained about Miss Bostick, who happened to live in the same duplex that we did. I had Miss Bostick again in the seventh grade, and I started complaining when the school year started.

One night my brother slammed his fist on the table and said, 'I don't want to listen to this for another year! That woman has probably heard every word you have said through that wall. Here is what I want you to do:  every time you get that pigpen stamp say to yourself that at the end of the year I am going to tell Miss Bostick exactly what I think of her.'

This advice got me through the seventh grade with great anticipation for the end of the year. The end of the year came, and I chickened out and did not say anything to Miss Bostick. I thought my luck had finally changed when I went to the eighth grade at a new school.   Lo and behold, Miss Bostick had changed schools as well, and she ended up as my eighth-grade English teacher, too!"

We post a new story every week! Be sure to LIKE our FB page so you don't miss any... https://www.facebook.com/LifeBio/

Ready to tell YOUR story? We can help! www.Lifebio.com