The Day After Graduation 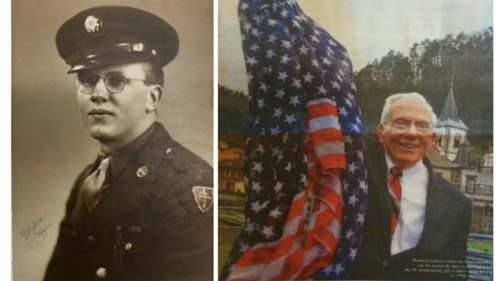 I enlisted a day after I graduated from high school. I chose the Army because I knew if I went in the Navy, I would get seasick, so the Navy was not a good choice for me. My vision wasn't good, so flying was not for me either. I believed enlisting was the responsibility of anyone physically able to serve their country.

To me, leaving was an opportunity to get away from my hometown and see what the rest of the world was like. My parents were very supportive. My dad sat down every night and wrote me a note. It was tough when the mail came, especially when we received the mail in combat. I received so much mail, but some of my buddies did not even get one letter.

I don't think I would call my time in the service "fun." What I learned about life was really worthwhile. Throughout the rest of my life, I learned that I needed to handle someone's instruction and not try to fight it. Being a team player was more important, and you learn to accomplish more than being solo.

My first combat was on June 12, 1944, in the Cherbourg Peninsula in France. This was the place my 904th Field Artillery Battalion had landed on Utah Beach with our artillery guns to help the 79th Infantry in their move forward to take the city of Cherbourg.

I was the Forward Observer, which meant I was in charge of the radio. My job was to travel with the Infantry. I received information from the Artillery Forward Observing Officer and radioed it back to the Field Artillery as to where the German army and guns were located. That way the U.S. Army could effectively aim their guns at the German army so that the artillery could move forward toward them.

One day, some U.S. soldiers had advanced into an area that had not been conquered by the U.S. Army. I ran to tell them they were in danger, and on the way back, a German machine gunner opened fire. I saw the dust kick up in the air in front of me and immediately hit the dirt. The gunner shot me in the calf of my right leg. The bullet had entered the fat part of the calf and exited the fat part of the calf as well. The medics put some sulfur in the wound and bandaged it up. I then joined the infantry division again.

The Infantry Captain was extremely angry because he was without radio contact to the Field Artillery. He was the most unhappy with me! Somebody said to the Captain, "[He] was wounded." The Captain did not make any comment. The unit kept advancing and captured an SS tank officer.

In the winter of 1944, I was in Eastern France, recuperating from my leg injury. My parents had read an article that said to include a toy, which could be given to a refugee child, in each box they sent overseas, so they had sent a box of toys to me. I took the toys to a town in France and gave them to a mother with three children. The children hadn't had anything for Christmas for four years!

I returned to France 71 years later and -- after some intense detective work on the part of a local paper -- I was reunited with a lady who was one of the three children in the family that I had given the toys to all those years ago. Maria had been four years old, and I was a 19-year-old soldier the first time we met.

I had the feeling that at that moment, my mission was completed, as "Santa Claus had returned to France."

Are you ready to tell your own story or to help honor veterans in sharing their stories? Contact LifeBio to get started today. https://www.lifebio.com, info@lifebio.com, 1-866-LIFEBIO