That old Vaudeville joke got it down right: “Denial isn’t just the name of a river in Egypt.” Well, on Feb. 20, I had my 77th birthday. It turns out that 77 years means you’ve spent exactly 4,000 weeks on earth. See: “Four Thousand Weeks: Time and How to Use It by Oliver Burkeman – review”

About growing old, here’s an image which says it all (and, yes, I got it for a birthday present): 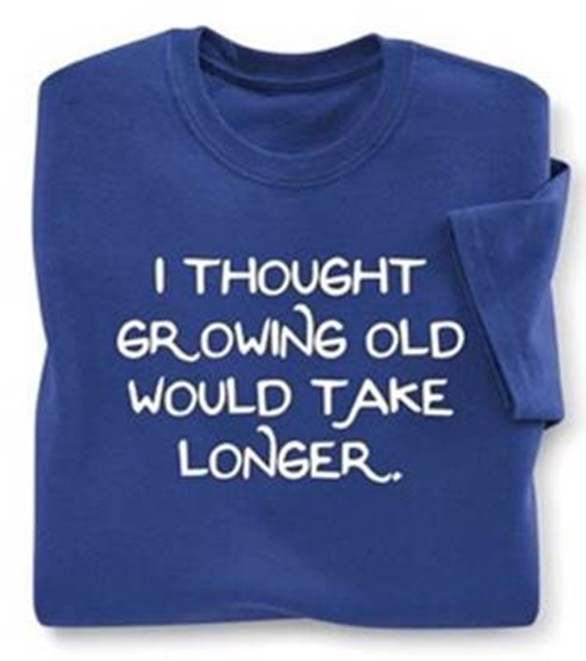 Having myself spent many years promoting “positive aging” I learned to pay attention to what Hegel called “the tremendous voice of the Negative.” So, at the suggestion of a friend, I reread Arthur Krystal’s “Why We Can’t Tell the Truth About Aging.” Krystal rightly quotes V. S. Pritchett comment on Muriel Spark’s novel Memento Mori, when Pritchett called aging “the great suppressed and censored subject of contemporary society, the one we do not care to face.”

But some have faced aging. I never met Simone de Beauvoir but I eagerly consumed her 1970 book, The Coming of Age. I resonated with her conclusion: “There is only one solution if old age is not to be an absurd parody of our former life and that is to go on pursuing ends that give our existence a meaning—devotion to individuals, to groups, or to causes—social, political, intellectual, or creative work.” Having begun my own work in aging in 1971, I soon came to one who would later become my boss and mentor, Robert N. Butler. Dr. Butler’s 1975 Pulitzer Prize-winning book Why Survive? Being Old in America concludes on a negative note: “For many elderly Americans old age is a tragedy, a period of quiet despair, deprivation, desolation and muted rage.”

Two opposing views? Ronald Blythe’s The View in Winter, offers still another view: namely, that there is no single conclusion. “Old age is full of death and full of life. It is a tolerable achievement and it is a disaster. It transcends desire and it taunts it. It is long enough and it is far from being long enough.”

How long is enough? I had occasion once to meet Dr. Ezekiel Emanuel, younger than me, not long after he published his article “Why I Hope to Die at 75.” The article prodded me and others in the Gerontological Society to convene a standing-room only session to debate Dr. Emanuel. Since he couldn’t attend in person, I had to be the one to expound his argument: namely, that by age 75 “creativity, originality, and productivity are pretty much gone for the vast, vast majority of us.” His conclusion? “It is difficult, if not impossible, to generate new, creative thoughts, because we don’t develop a new set of neural connections that can supersede the existing network.”

And what did Arthur Krystal think of all these contradictory perspectives? In Krystal’s own words: “A long life is a gift. But I’m not sure we’re going to be grateful for it…far from devaluing old age, we assign it value it may not possess.”

Well, I am not in the business of “assigning values,” nor even in preaching “positive aging” now that I’m old enough to speak about it. But I do believe in what we can call conscious aging, well expressed by the poet Louise Bogan: “At first we want life to be romantic; later, to be bearable; finally, to be understandable.”

Now, readers, don’t send me a birthday card. That date is already past. I’m on to the next chapter of life, whatever it may be.